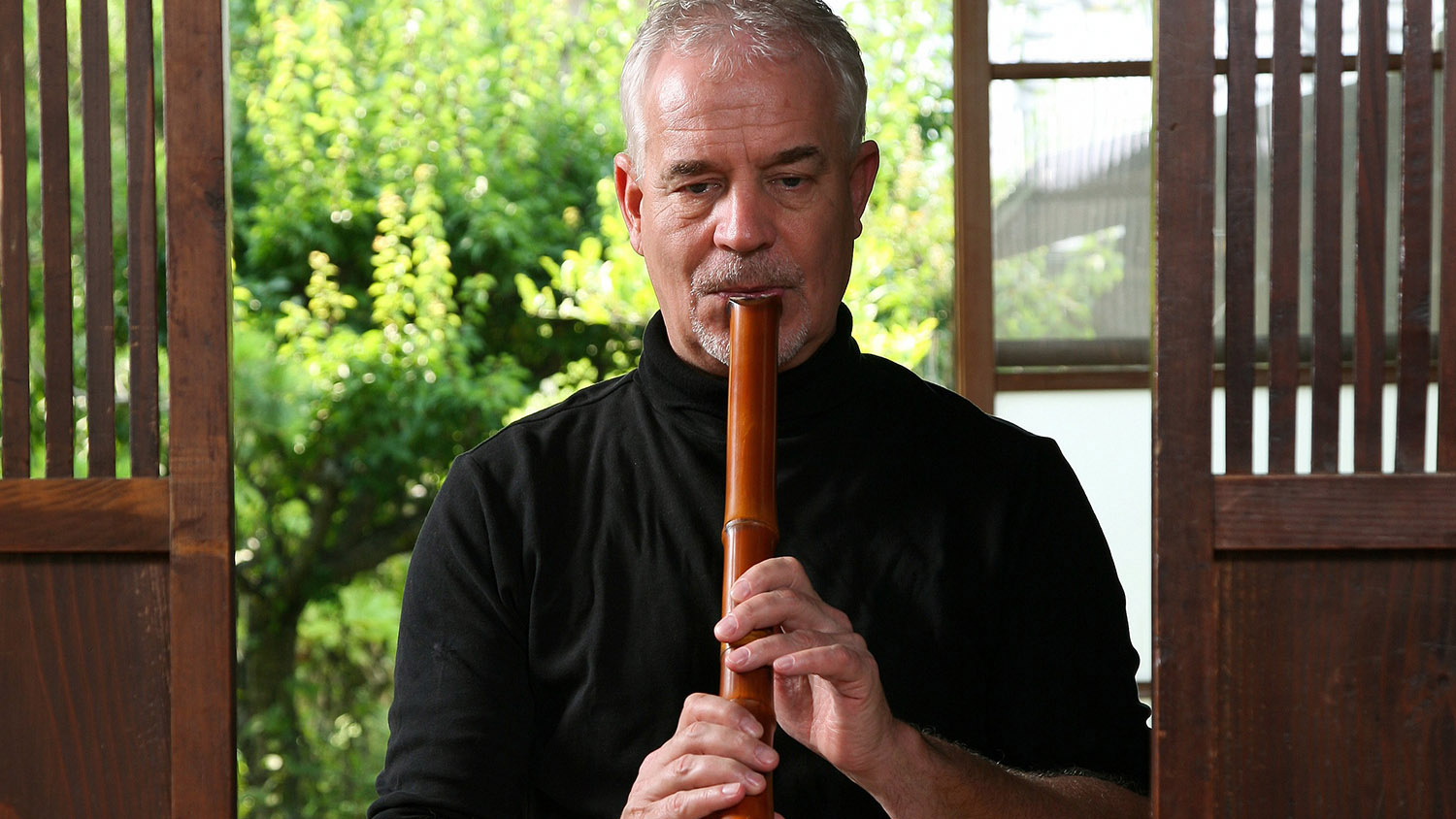 A soundtrack is an important part of movie, including a documentary. Without it, emotions cannot be conveyed. The soundtrack sets the mood for the audience… is this a fun or light-hearted journey or a serious exploration or something between the two? As Empty Mind Films began production on the second film, we were aware of the mammoth task of finding the right soundtrack for a documentary on Zen. We knew it would be a difficult subject for our second film, and it was perhaps too ambitous. The pressure was on!

For our first release, The Empty Mind, we were fortunate to find a rare gem in our backyard – a talented musician, Richard Brookens of Yellowbell, who produces wonderful world fusion sounds with Asian instruments such as Tabla drums, clay pots and bamboo flutes from China and India. Our collaboration produced a separate soundtrack released on CD by Yellowbell. Could we be lucky again two years later, with the music for The Zen Mind?

I spent the next few weeks listening to Japanese music. Not the JPOP or pop Music that was on every teenagers iPod in Japan, but authentic sounds indigenous to Japan. Indigenous was not exactly correct, because, like Buddhism, many of the instruments in traditional Japanese music were imports from China, such as the Zither or Koto in Japan – a 13-stringed instrument. I listened to other string instruments such as the Shamisen and also wind instruments or flutes. My concern was that ‘authentic’ sounds would I fear, not be palatable to people outside Japan. The one instrument that I was drawn to was the Shakuhachi, a large bamboo flute with an ancient history in Japan. Even so, I was still undecided and a week away from our first trip to start filming.

I was in Shinjuku, Tokyo, at the Keio Plaza hotel, the same hotel we stayed during the filming of The Empty Mind, almost three years before. We had just completed our second interview for The Zen Mind with Gudo Nishijima, a Soto Zen master of some standing, who sadly passed away ten years later in 2014 at the age of 94 years. Later that day I went for a walk in Shinjuku, a crowded district (well most of Tokyo is crowded) known for shady entertainment (think Soho in London), bars  and shopping. I was visiting a store that sold (and made) the Shakuhachi. I arrived at the store and was relieved to see it open. It was very small with all the walls lined with everything Shakuhachi – bamboo flutes of all sizes displayed in rows and compact dics and books lined the other walls. An elderly lady came greeted me in English. I was the only customer and she was happy to talk about the Shakuhachi, showing me the finest examples, dating back centuries and kept in locked showcases. I turned the conversation to music and asked which was her favorite Shakuhachi performer, and she said “Well, this is one of my favorite performers” and took a CD from the shelf. It was Christopher Yohmei Blasdel. She continued with the smile of someone about to share a great secret, “Yohmei san is the best in Japan and he’s from America.” What a recommendation, I thought. I bought two Yohmei Blasdel CD’s and left the shop, hoping that I had found the music. I was excited as I listened to the Shakuhachi of Christopher Yohmei Blasdel. It was wonderful. I could imagine images of Zen gardens in Kyoto and monks in Zazen, deep in meditation. But was there enough for a soundtrack? A week later I was able to send Christopher Yohmei an email, asking to meet. I was in America and preparing for the second trip to Japan to film The Zen Mind. A week before departure I received the email I was waiting for, from Christopher Yohmei. We agreed to meet for lunch in Shibuya, Tokyo where he lived. He had spent over thirty years in Japan, studying the Shakuhachi.

I met with Christopher the day after I arrived in Tokyo. He is fascinating to talk to, displaying a deep knowledge of Japanese culture and the Shakuhachi. I gave him an overview of our film content and schedule. With foresight he had brought with him two compact discs, explaining that I could only use music from them, due to contractual issues on his other recordings. One was Zen Reveries and he could see my face light up. “Yes, this album may be suitable” he said and he explained how the music was made with added synthesizer by Uehara Kazuo. Shakuhachi Zen Fusion! I thought – Just what I was looking for. I had to wait three weeks, after filming ended and returned home to America before I could listen to ‘Zen Reveries’. I listened with headphones and my eyes closed so I would not be distracted. I could see the Zen Temples of Kyoto where I had been filming days earlier. The large Soji Zen temple where I filmed the monks in Zazen meditation. And the incredible Shakuhachi of Christopher Yohmei filling my senses. The music was perfect. I was ready to start editing the film!

Six months later I sent a copy of The Zen Mind to Christopher Yohmei Blasdel and awaited his reply with some nervousness. Then one day a large padded envelope arrived via airmail. It was from Christopher and inside was his book, The Single Tone, his personal journey into Shakuhachi music. He included a note, thanking me for the care and skill we had shown in editing his music. 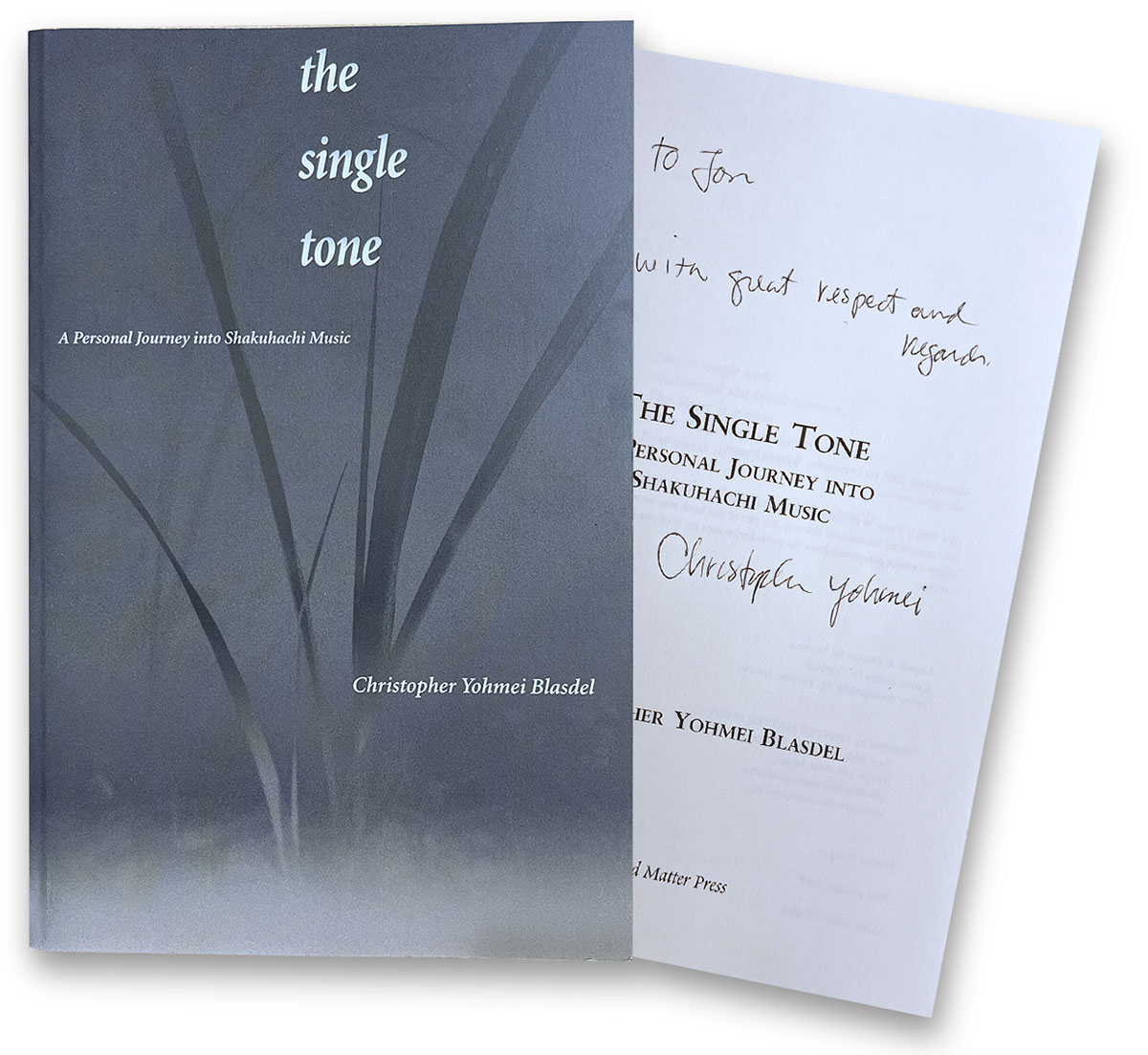 This week I received an email from Christopher Yohmei Blasdel. After having  lived in Japan since 1972, he had moved to Hawaii in 2016.. The email was to inform me that his book, The Single Tone, which has been out of print for many years, was now published by him on Kindle (Amazon). This is wonderful news. I am sure he will forgive me in sharing part of this email here: “I wrote the original Japanese version to provide an outsider’s view of the Japanese society in a style and voice that would interest the average Japanese reader. It must have struck a chord with its intended audience, because it was awarded the prestigious Ren’nyo Award for non-fiction and published by Kawade Shobō Publishers in Spring, 2000, selling out soon after publication. The English version, first published in 2005,  is a close translation of the Japanese, with some minor additions and clarifications of circumstances, situations and cultural contexts that might not be apparent to the non-Japanese reader. In the brand new E-book version, I have have added a few more photos and exchanged most of the black and white photos of the print version with color photos.”

The Kindle edition of The Single Tone can be found here. It is a wondeful account of one of the most fascinating journeys taken by an outsider in Japan.

← Prev: Okinawan Karate Master Hokama Tetsuhiro 10th Dan Hanshi As we leave one year for the next... →